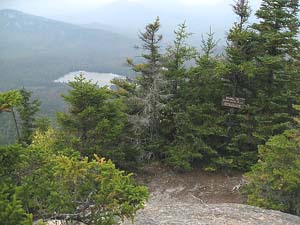 For our September 22nd hike Sally will be taking us to Mt Tremont; here is her preview:

Mt. Tremont: round trip 5.6 miles, approx. 5 hours, 3371' high, 2600' elevation gain, west of Bartlett on Rt 302. Taken from the White Mountain Guide: "Mt. Tremont is the highest of several lesser peaks that rise in the region around Sawyer Pond, east of Bear Notch Rd. Tremont lies south of the big bend in the Saco River above Bartlett; it is a narrow ridge that runs north and south, with three conspicuous summits of which the southernmost is the highest. The main summit of Tremont has spectacular views to the south, west, and north." 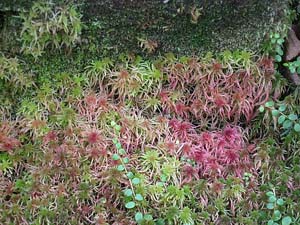 We'll be hiking up and down the Mount Tremont Trail. There's a great ice cream spot just east of Bartlett/Bear Notch Rd. on Rt 302.

NEXT HIKE: September 22, Mt. Tremont
MEETING SPOTS: Exit 14 off of Rt. 93, LL Bean/Hannaford side, Concord at 7:30 a.m.
Mount Tremont Trailhead at 9:30 a.m
TRAILHEAD: The trailhead is on the south side of Rt 302, 0.5 mile West of Sawyer Rock Picnic Area. There is parking on the north side of Rt 302, opposite the trailhead.
HIKE LEADER: Sally Nickerson 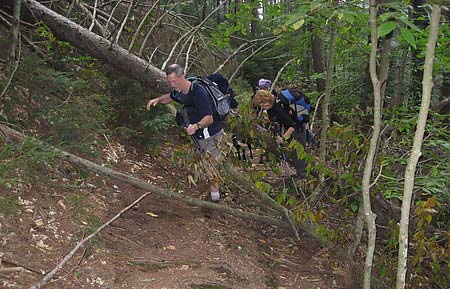 On the 22nd, Sally led us to the top of Mt Tremont; here is her write up:

On an unusually balmy day, nine hikers and two dogs started out in dense, low cloud cover (with the promise of clearing skies). Shortly after leaving the cars, several people had to remove layers of fleece and long-sleeved shirts due to the warm air temperature. The trail followed alongside a brook for about the first mile or so, at a relatively gradual grade. There were pockets of beautiful foliage along the brook and some blowdowns we had to crawl over or under.

After about 1.5 miles we started to climb more steeply. The trail made several winding switchbacks and at times went straight up through dense forest (the AMC book described it as "moderate" - all tended to disagree!). There were views of Crawford Notch and Rt. 302 on the way up. (If it hadn't been so hazy, we would have had some nice views of Mt. Washington.) The sun had come out about halfway up, and the humidity was high, which made the climbing more difficult. We all lost several pounds in sweat alone!

The first group to reach the summit made it in 2.5 hours (just under "book time" of 2 hours and 40 minutes). There was a different group of hikers already at the summit that were preparing to leave, so we waited and claimed their spot on the rocky summit for lunch. Through the haze we could pick out several peaks and Sawyer Pond to the south. There was much discussion (and confusion) as to where "south" was. Mark got us oriented with his compass (thanks Mark). A slight breeze provided a bit of welcome cooling while we ate lunch (and kept most of the bugs away). 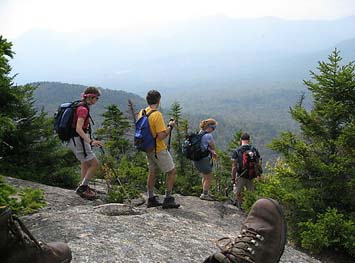 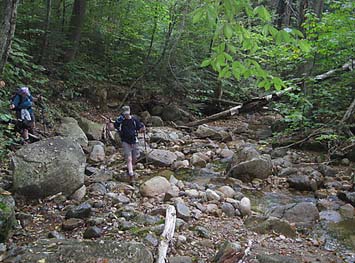 The trip down proved to be a little "bumpy" for some, due to the rocks and roots made slick by all the humidity. We were back at the cars after 2 hours of hiking down. The ice cream spot we had planned to stop at in Bartlett was closed for the season (much to everyone's dismay). At that point we said our goodbyes, as half the group was headed over to I-93 and the other half down Rt. 16. Both groups managed to find an alternate ice cream spot on their way home. All felt it was a good day - though a bit unusual to have such a hazy, hot, and humid day so late in September. 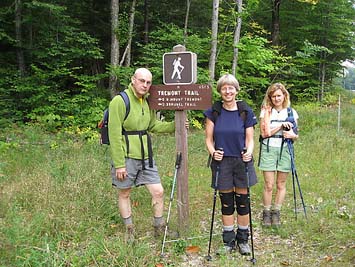 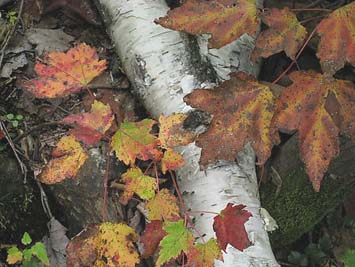