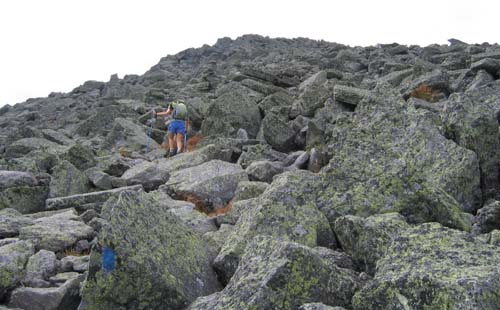 We will first ascend Mount Adams via Air Line and then take Air Line down to Air Line Cutoff over to Madison Hut and then over to Mount Madison and down Valley Way.

Air Line and Air Line Cutoff: Air Line starts at Appalachia with the Valley Way and shortly diverges right. It is steeper in parts than Valley Way and rougher. It reaches treeline at a lower elevation and has excellent views into King's Ravine as it goes along the crest of Durand Ridge. Air Line Cutoff connects Air Line to the hut and is sheltered by scrub. (3.7 miles, 3550 feet, 3-4 hours)

Valley Way Trail: We will descend Madison via Valley Way . The grades are easier than on most of the other trails, and the footing is better. It is in the trees with no views until the hut, but since the hut and adjoining summits have such great views that is no great loss. (3.8 miles, 3,550 feet, 3-4 hours)

Distance from Adams to Madison hut is less than a half-mile and takes about 20 minutes. 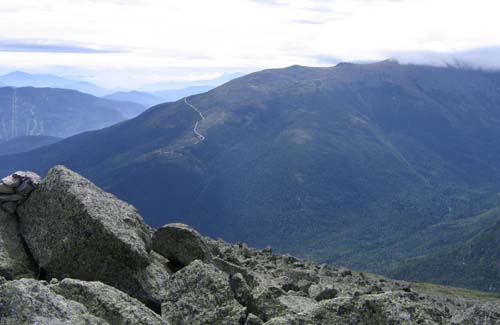 This is a very strenuous hike and will be at a moderate to fast pace. Please consider your current hiking level and this season's hiking experiences prior to coming on the hike and whether it is feasible to complete both peaks more or less with the group. We will not be waiting 1-2 hours in the parking lot as we have on several hikes this year. Those that finish first are encouraged to report to the Woodstock Station in North Woodstock for refreshments rather than plunk themselves down in the parking lot for an extended period or you can go get ice cream wherever you want or just head home. Please keep your fellow carpoolers informed and make arrangements with them if you split early.

Please choose just one peak if you think your condition or pace warrant. If condition and pace are an issue for you, you may want to arrive at the trailhead an hour early and leave a note on your windshield or the hiker kiosk or e-mail me or leave a message on my cell the night before if you plan to do that. If you tend to fall behind on the way down, you probably should leave the peak well ahead of the rest rather than lingering. Please bring a map that includes the trails leading to these two peaks. 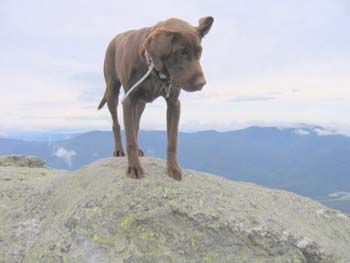 In my opinion if you wanted to save some time and effort but still do an interesting and challenging hike, a good choice would be to go up Air Line only as far as Air Line Cutoff then to the hut then over Mount Madison and back down Valley Way. If you are not having an optimal day or brought someone new with you, you could always just hike up to the hut and down and skip the peaks. Don't forget you can use Yahoo Groups to discuss your trail or carpooling options ahead of time.

Now that we are into September, it is important to bring extra warm clothing/wind protection.

NEXT HIKE: September 6, Madison & Adams
MEETING SPOTS: Walmart in Newington at 5:00 a.m.
Exit 14 off of Rt. 93, LL Bean/Hannaford side, Concord at 5:45 a.m.
Mobile station in Wakefield (junction of Rt. 16 and 109) at 5:45 a.m.
Air Line Trailhead at 7:45 a.m
TRAILHEAD: The Air Line trailhead is located in the Appalachia parking lot on Route 2 in Randolph. Appalachia is a large parking lot from which many trails depart and is on the south side of Route 2. It is approximately 5.5 miles west of the western junction with Rte 16.
HIKE LEADER: Diane King 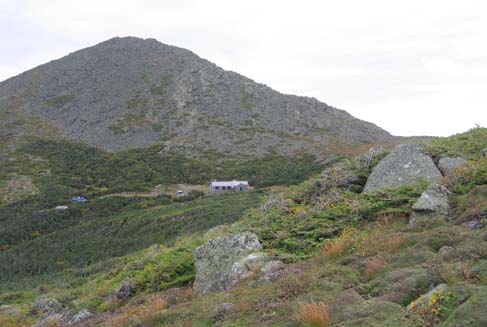 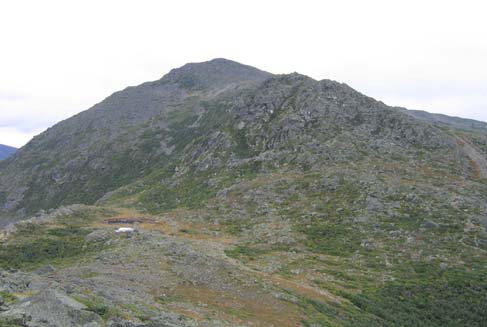 Three dayhikers and two labs arrived at the Appalachia parking lot and departed around 8 a.m. The forecast wasn't terrific due to the hurricanes down south expected to push rain and wind through New England over the weekend; and I am sure that, together with the warning of a brisk/strenuous hike, deterred the majority.

Deb had previously decided to bag just one peak -- Mount Madison via Valley Way and Mark and Diane stuck with the original plan to go up Air Line over to Mount Adams then to the hut and then Mount Madison.

We remarked from the beginning that it seemed odd that Deb's dogs never even tried to meet us on Air Line. We had clear skies and temps in the upper 60's to begin. We expected to reach a cloudy/windy summit; instead we hiked into clearing blue skies and lots of sun (about 75 degrees) and a fantastic view of King Ravine, the summit, Mount Washington and Madison Hut. 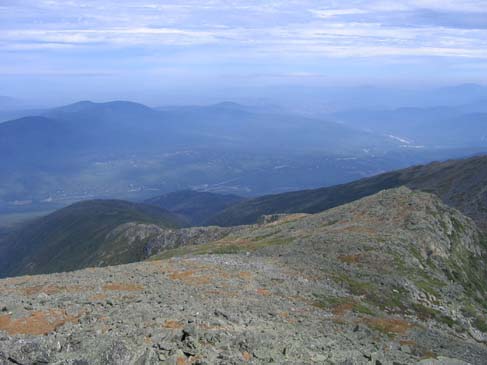 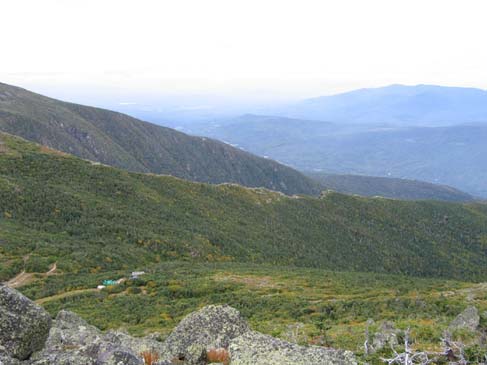 After the cutoff we took Gulfside Trail to the rocky summit of Mount Adams. We looked below to the hut for the dogs and Deb but couldn't see them. Two people were at the summit but left shortly. We ate snacks… Mark had some sticky melon in hand when we looked up and saw a rainbow and I said "quick get the camera". He dropped the snack and took pictures and then I grabbed the now sticky camera to get some with him and the rainbow. This was a first in my life to see a rainbow at the summit and it was extraordinary. A few tenths down we saw another rainbow positioned over King Ravine -- this was more clear and brilliant and Mark pulled out the camera again and we pondered whether Deb would be able to see these from wherever she was.

We continued to the hut and had lunch around 12:30 to 12:45 and figured Deb must be up on Mount Madison now. We looked out to see her hitching up the dogs outside and she came in and said the dogs had already been over to Adams. The five of us summitted Madison via Osgood Trail. I got to the top and the dogs met me there and there was an older couple who said those were the dogs they had been feeding peanuts to. Then Deb and Mark arrived and a younger couple who said those were the dogs they saw on Adams… so, the dogs are out there bagging peaks like crazy even if we all aren't with them. The second couple said they were checking their paws because they figured they would be bleeding…uh ha…no way, these pooches can do anything… they just need to beg a little along the way. 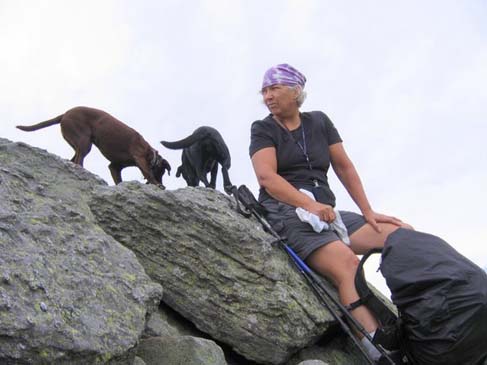 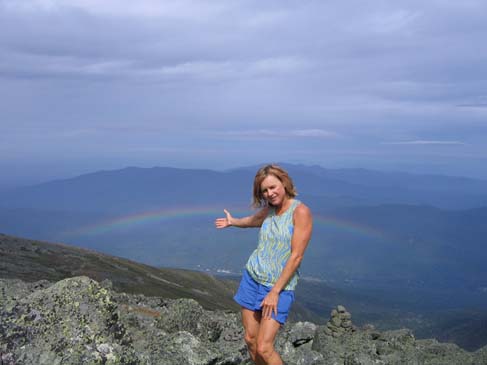 So down we went about 3.8 miles down Valley Way, cloudy skies took over at Madison's summit and followed us the remainder of the day with a couple intermittent light showers. The crew seemed a little weary when the shower hit on the down stretch so I used one of those "professional hiker motivation techniques" and asked what flavor of cold beer they wanted from the icy cooler stowed in the trunk at the parking lot. Suddenly new color and vigor appeared and we slipped and trekked and whined a little for another mile. Then we met up with two young caretakers on their second trip up to the hut for the day. One was a young college-age gal with a wood frame "pack" carrying about 48 pounds who cheerfully told us how she took a header on the way up… we were spellbound and managed to carry on for another mile I think before we started whining again.

We were down at 5:15 p.m. and gladly stood in the light rain sipping refreshment and talking about how it was a day we were glad we didn't miss.

Oh, if you want to see the abbreviated version of the trip report, here's Mark's version:

As usual Quincy and Tessa stole the show, everywhere we went there were other hikers who had somehow previously met them. For a hike that was a potential rainout we made out great. A terrific hike, two rainbows and a moose sighting on the way home! 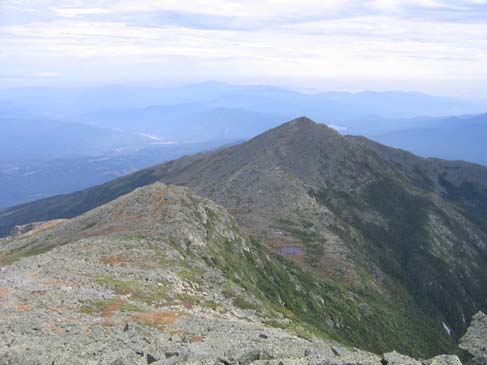 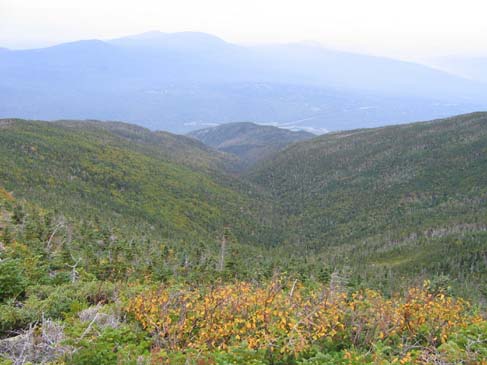 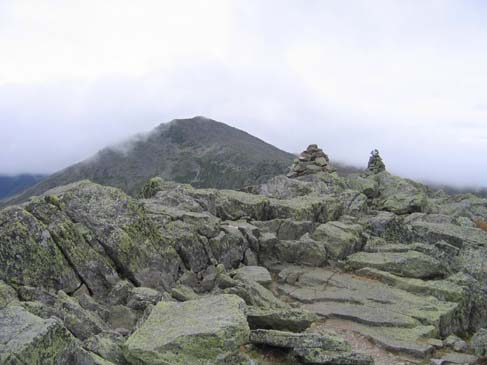 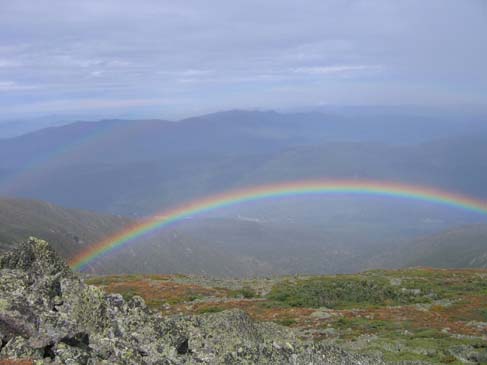